How does it feel to celebrate Women’s Day on the doorsteps of home, lying in the crucial pain of betrayal and desertion resulting in the loss of self-worth?

I lie down as a sign of submission and acceptance to my life partner and surrender my life-guarded treasure on the trust of the sanctity of marriage. In the dark, he blows his horns, arouses himself to joy, loosens the strings, tosses himself all over the island to wander in the depths, and suddenly thrusts his pointed spear to rejoice in blooded victory.

I bequeath to him the pride of ownership of my womb to add lineage to his name. As he nurtures on my wife power for his needs, the only return that pleases me is to see him fulfill his man’s duties. Definitely, I expect and this is not some unreasonable demand from my end. 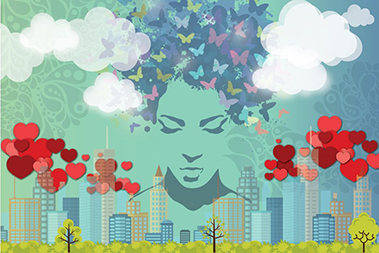 Two years dedicated bedtime journey could not erode the underlying chauvinism beneath his thick masculine flesh. After an ample sacrifice of blood and tears, he used to torment me with blames, sexual strikes, nagging, withdrawal of rights and humiliation to add pride to his genes. He believed to be the Master of the home and our lives because of his excessive desire to ruthlessly command and my weak intensity to abide.

With these bearings in mind, he threw me out of our home with no concern for my safety investment or emotions. For those moments, I felt like I was destined to die in the wild storm of the male sovereignty. I was exposed to a tough and aggressive environment that dims the subtle, beautiful feminine qualities cementing the alluring curves of our body whereby we tend to follow our foremother’s tradition of obedience and submission. Imprisoned in constant control and fear, one is unaware of the enormous power within us as a life-giver and a natural healer to the universe. But I prefer to be different; I want to stand against the injustice done to my matrimonial rights and a woman’s pride irrespective of the hidden social constraints behind the mask of modernism.

Let the world now see with their naked eyes how a woman entrenched with the secret of flow of life can set ablaze the entire male constitution.

A lightning bolt deeply hit me inside my head awakening the suppressed Shakti (force) to release the pain. I realized that surviving in a destructive relationship needs to end soon before it slowly swallows down my self-existence.

The whole world was immersed in the celebrations of Woman’s day honoring the feminine pride, power, and revolution that changed the traditional social dimensions. The Government, NGOs strived together to create a powerful awareness campaign, support gender equality and provide donations for woman education and empowerment.

PaintItPurple represented justice and dignity for woman around the globe, why I was devoid of it?

No longer the mistress of the home, I parked myself on the staircase with an oath not to move away from here till the apologetic doors finally open up to confer my conjugal rights.

Once upon a time the man curled me in his arms, offering kisses, as his arms formed a sensual garland to bind me close to his chest. Today, the same man by the staircase in disdain distorting his face. The man is the same, but his feelings are different; like a sharp axe, his rude behavior bleeds me down into several pieces. hurls sarcastic remarks, piercing wounds, verbal abuses whenever he passes

I never thought in my wildest dreams that instead of my wedded spouse, bearer of seven marriage vows; an entire neighborhood would stand like a battalion behind me. I am obliged for the every drop of water, morsel of food, expense support, and amenities offered out of generosity. Whenever I stand before God, a thanksgiving prayer shall be meant only for these kind-hearted souls in disguise of angels.

“I want to rediscover myself like never before with new perceptions, bright hopes, fearless attitude, clear vision and a strong voice to convey my bold decision.”

My mind slowly recollected the grand Grihapravesh event lavishly done to welcome our first entrance to a new beginning with abundance, grace, and joy. The trail of my auspicious red footprints seems to be washed away by the tide of tears. The mischievous winds made my pinch of red sindoor disappear from the forehead parting in the far away direction to reveal the cryptic secret. The bridal voice of laughter, hopes, dreams swept away in the hurricane. Only silence and stillness witnessed the inner turmoil that desired to discover serenity.

The High court declared immediate judicial decision in my favor that was a momentary feeling of elation that soon eroded away.

I was shocked to see a closed lock on the door of our home. I sensed something suspicious, hence knocked the gates of the Police station for quick law enforcement. Cops called up my absconded husband on his mobile number, only to receive this cold reply, ‘‘Due to personal exigencies, I am out of the station. Not sure of my return date. Sorry but keys are with me’ Definitely, the vicious behavior from manosphere did not stun or defeat the courage of a lonely woman.

Today, as I sit in a strike posture outside the Police station waiting for their action, I feel the deep pain transcend beyond sensory spirits and a rage burns within me to consume immorality. I look up in the skies, asking the divine power that created me, if, on an occasion of Woman’s Day month, he could deliver springtime to fill up the barren garden of my life.

How could we celebrate Women’s Day even when one woman of our society was struggling alone to achieve her rights?
Would you like to join her in celebrating Women’s Day Sequel without any media propaganda and glamorous events?